In 2020 worldwide travel has largely subsided due to the spread of a dangerous viral disease named CoVid-19. Therefore, I had to scrap my travel plans as well and decided to spend some time hiking in different areas in germany. For a 3 day weekend-trip, I finally managed to get to the famous Bastei bridge in swiss saxony, close to the czech border. The weather wasn’t always perfect but the whole area offers many hiking trails through forest and rock formations. On another occasion, I hiked around the ‘Externsteine’ in the Teutoburger forest in western germany. 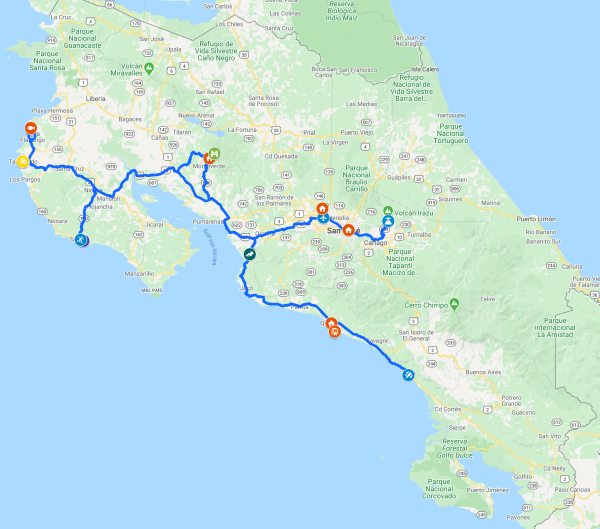 In spring 2020 a friend and I decided to explore Costa Rica. We found flights with ~21h stopovers in Toronto on the way to Costa Rica and ~23h in Montreal on the way back. Here are some pictures from Toronto and the 11 days for the western part of Costa Rica and a map of our tour. (Unfortunately, Montreal greeted us with rain so I didn’t take my camera out)

Originally, we had planned to go south from Samara to Montezuma and cross the bay by ferry but we really wanted to go diving and none of the 3 diving schools in samara was operating during the days we spent there. Then we changed plans and went to Tamarindo for diving before heading over to the national parks on the more southern pacific coast. Manuel Antonio, one of the most famous national parcs, allowed us to see sloths and different speciesof monkeys.

Ps: some of the aerial photos appear in the previous post about my new mavic mini as well since they were just too beautiful 😉

A new perspective – the world from above

5 years ago I built my first quadcopters. They flew, they were fast, they had video transmission – but what I didn’t manage with the little time I had was to built one that hovers perfectly still like the DJI drones did. Flow-sensors were pretty expensive and the cheap ESCs and motors in my small drones were probably not accurate enough anyway to allow stabilisation with a imple PID-controller running on an Atmega microcontroller. So after searching for a hand-luggage portable photography drone for years, in november 2019 the DJI mavic mini hit the market. Unfortunately that was during and not before my southeast-asia holiday so there was no rush to get it (and it was sold out anyway).
Long story short, I bought one in february, flew in Dortmund and took the drone to see waves in Costa Rica =) . Pics below ^^

Costa Rica, Dortmund, Drones, Quadcopters, The World from above

So… now I have 2 3D-printers. After I got my monoprice mini delta about a year ago, I had some fun with my first 3D prints but clogged nozzles, adhesion problems and the printer printing plastic-wool in the air became more and more frequent and frustrating. I looked into the Ender3 Pro and together with my brother, gifted one to my dad for his birthday. His first prints worked out of the box. So when there was a good offer for the Ender3 Pro just the morning after my mini delta had a clogged heat-throat again, I bought it. Setup took less than 1 hour and besides some parameter related stringing issues, it worked like a charm straight from the beginning.
Like every good 3D-printer owner, I’ve printed many upgrades but also some fun or useful things – and optimized my ‘plane phone holder’.

Another weekend trip to eastern europe. During an evening on the christmas market, a friend and I spontaneously decided to book another weekend trip. We found cheap flights to Cluj-Napoca in Romania and convinced 2 other friends to join us. We walked around the town, visited the botanical gardens (although it was freezing cold), took a trip to a salt mine, tried local food and had awesome cocktails and great coffee in the amazing variety of bars. Here are some impressions:

Lanzarote – Christmas on the beach

This was a first for me – Christmas far from home. We decided to take a family trip to the canary island of Lanzarote to catch some sun over christmas. As you can expect – not a really christmassy-feeling – but we explored the island, whose architecture and art was mainly influenced by César Manrique, by bus car and bike, chilled by the pool and I event went diving.

After being land-locked in Chiang Mai, we flew to Surat Thani to get to Koh Tao for some diving. We decided to do a few specialties and I got deep & nitrox certified. As previously, Phoenix Divers Koh Tao and their fish-pointers (divemasters/guides :-P) did a great job at taking us to beautiful divesites although the visibility wasn’t as good as the last time. I bought a small rubber whaleshark dive-buddy which now rides the bubbles above my tank when I dive – so far it hasn’t succeded in calling its mom so I’d see a whaleshark again :D. We also took pictures from the 360° viewpoint and tried our luck to see turtles or sharks at shark bay (but didn’t). After Koh Tao, we spent the last nights of my 3 week trip in Singapore to re-visit some (rooftop)bars and meet some old friends.

Unfortunately, my Sony SEL16-50 lens broke during the time in Koh Tao and I could only partly fix it on the go so there are only a few pictures. After the replacement parts from china found their way to germany, I managed to get the lens working again =) .

During my Southeast asia trip in november 2019 I finally went to the north of Thailand and visited Chiang Mai during the Loykrathong / Yee-Peng festival. I only stayed for 3 days but visited temples, a cave, the ‘sticky’ bua tong waterfall and learned to cook amazing thai food.
At night, we bought sky lanterns and let them rise to the skies which looked amazing due to the many lanterns.
Please keep in mind that these lanterns may not be allowed to use in your country or area, especially if you’re near an airport. They pose a dangerous fire-hazard if they get entangled in a tree or fall down early. Chiang Mai has a special allowance and lockdown on night-flights during the festivities and many police officers make sure nobody is hurt by burning parts falling down.

I've been to 56 countries!!
by doa.travel